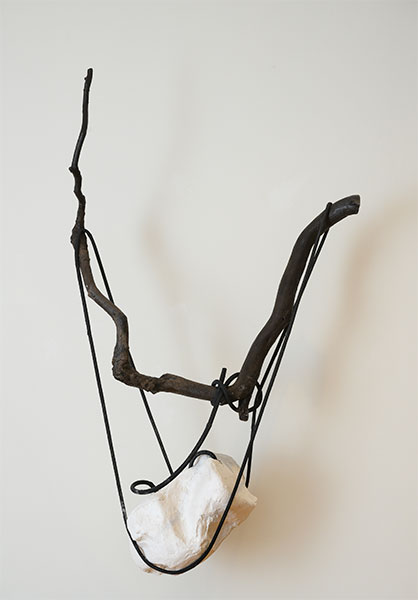 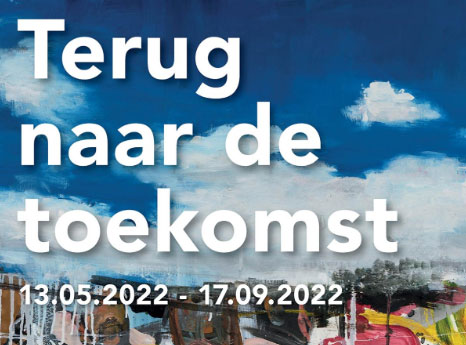 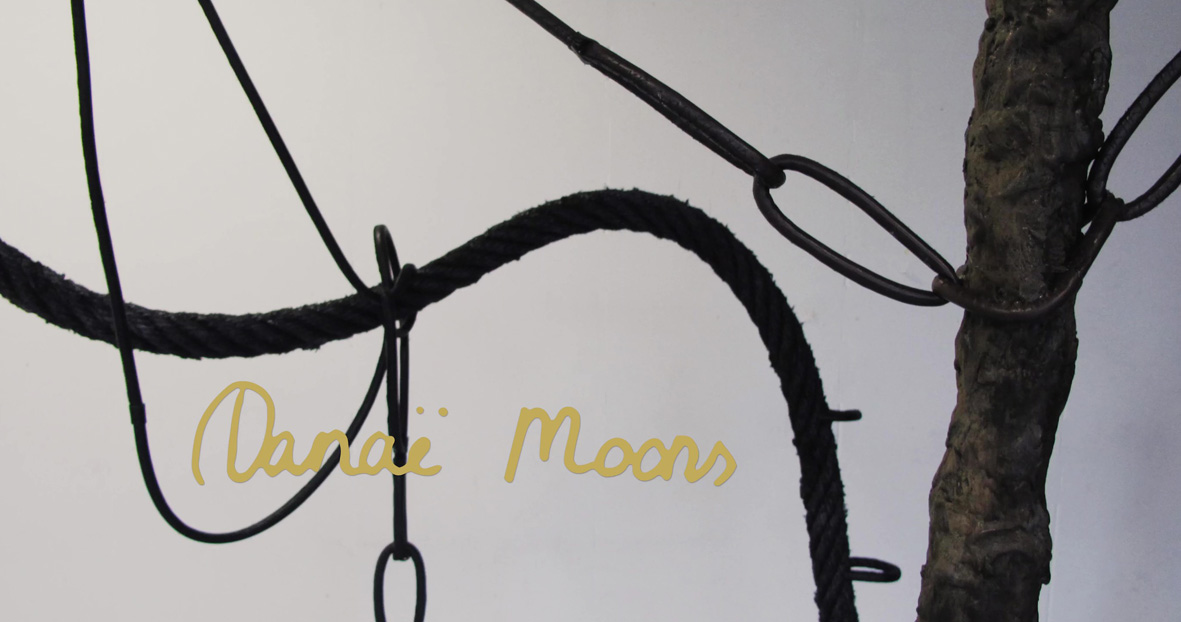 DOCUMENTARY
a short documentary, taking you on a journey through danaë's world and work, has been published. beautifully narrated by hans den hartog jager, a broader context on the works exhibited in bonnefanten museum
is provided. the relations between the different means of expression,
materials, chronology and danaë's personal interest are brought
together and placed within the art-historical framework in an
intriguing way.
the documentary has been made possible by the danaë moons foundation
in cooperation with the bonnefanten museum
view the documentary 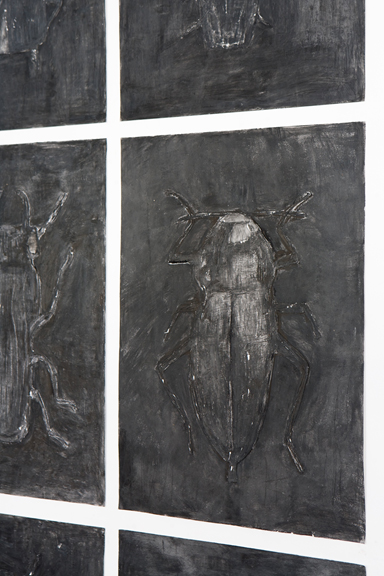 BEATING AROUND THE BUSH #6: SCENES FROM THE ANTHROPOCENE
a selection of danaë's works will be displayed within the exhibition programme 'beating around the bush' at the bonnefanten museum in
maastricht, the netherlands. the exhibition will open march 5th, 2020
and is open to public through january 3th, 2021
read more about beating around the bush #6 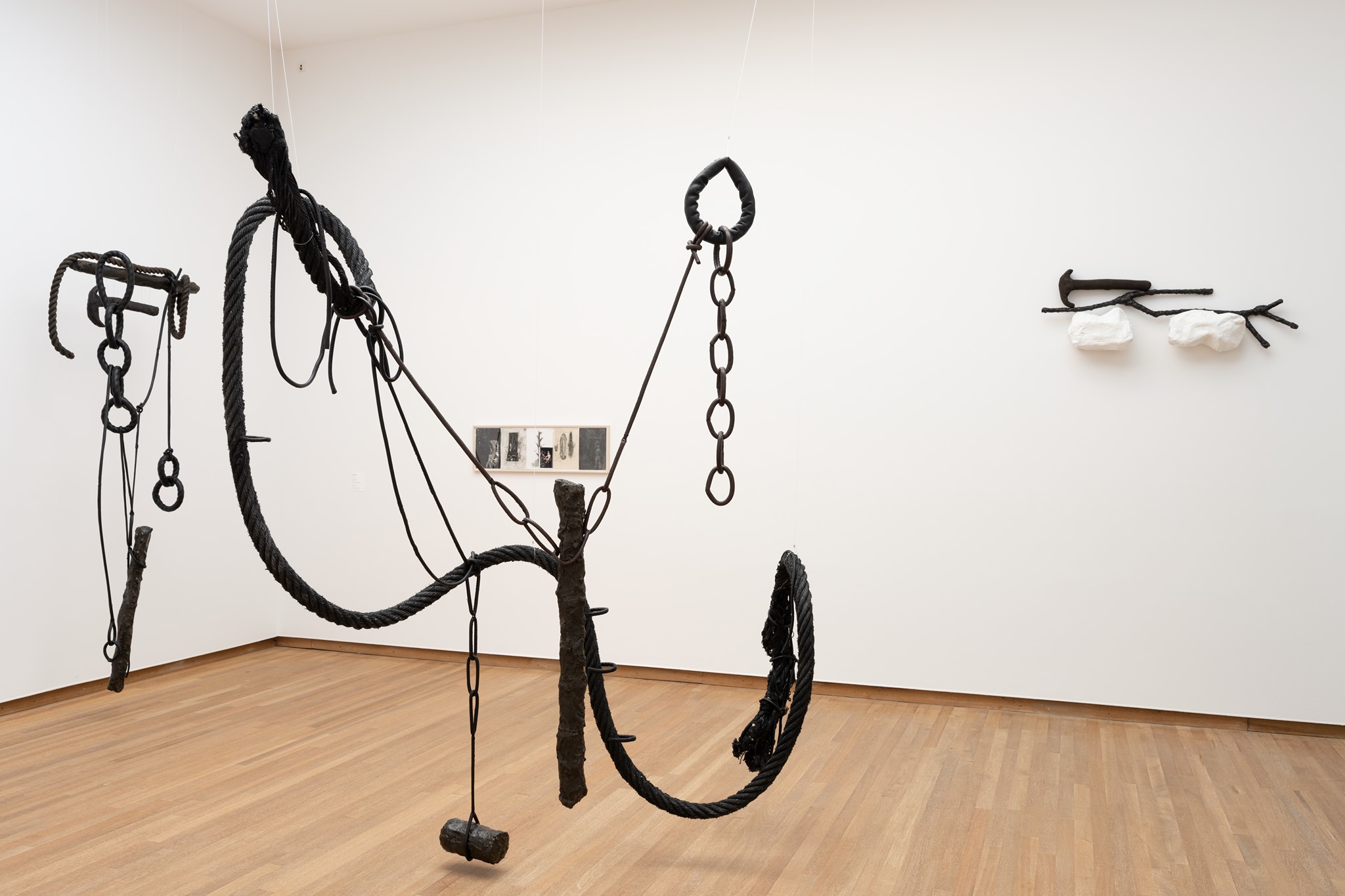 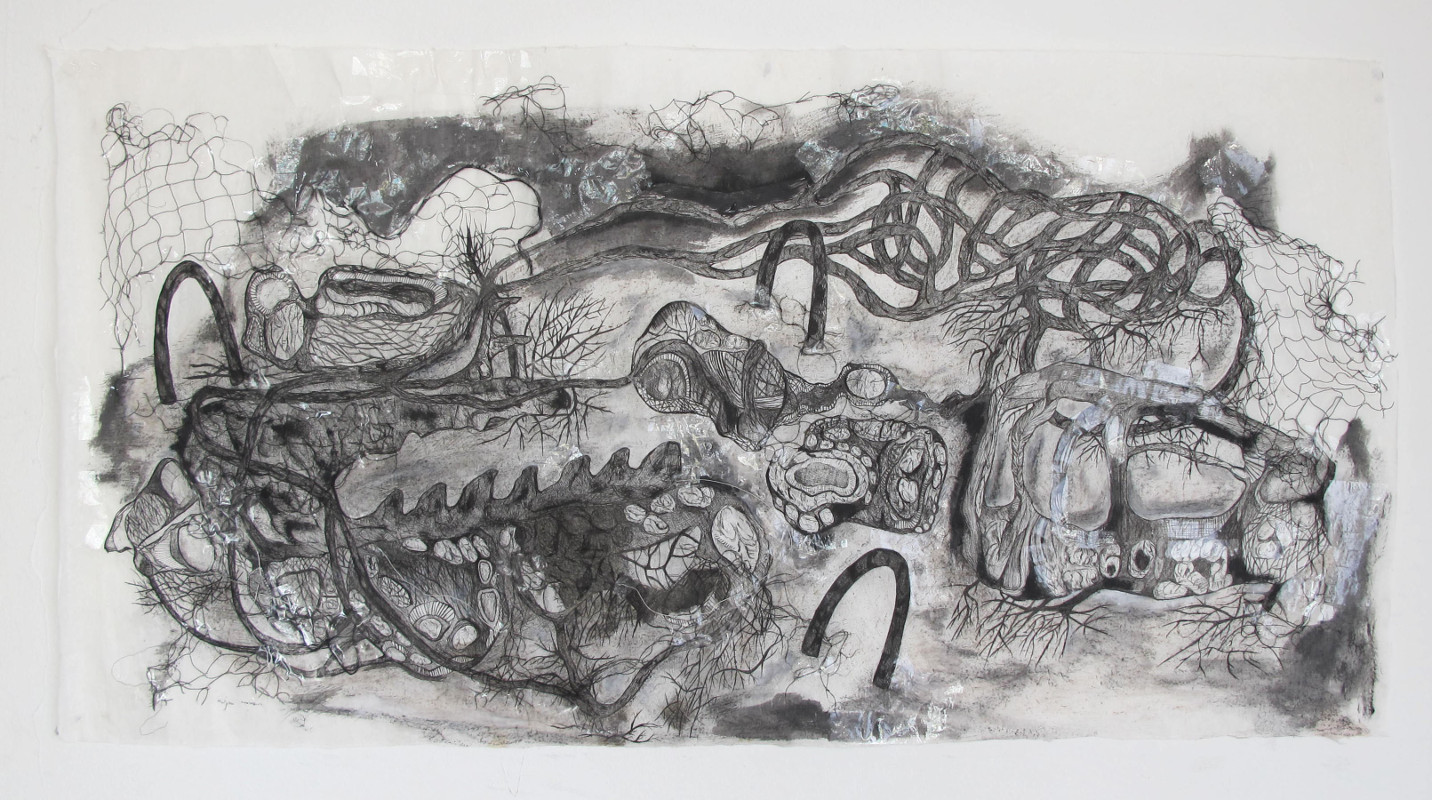 PLACE
a number of danaë's works will be presented in the dutch minestry of finance in the hague. the exhibition will open on april 4th, danaë's birthday. access to the building and exhibition is by appointment only 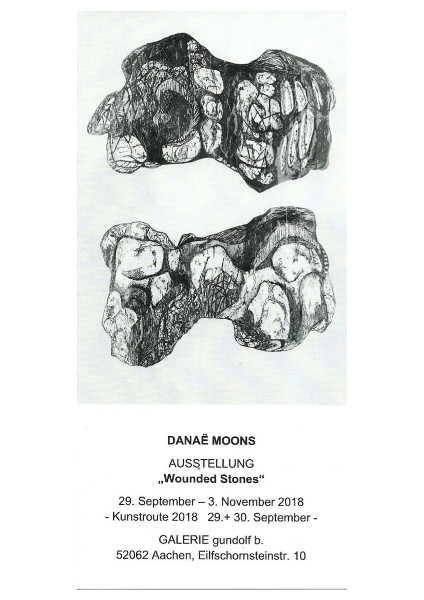 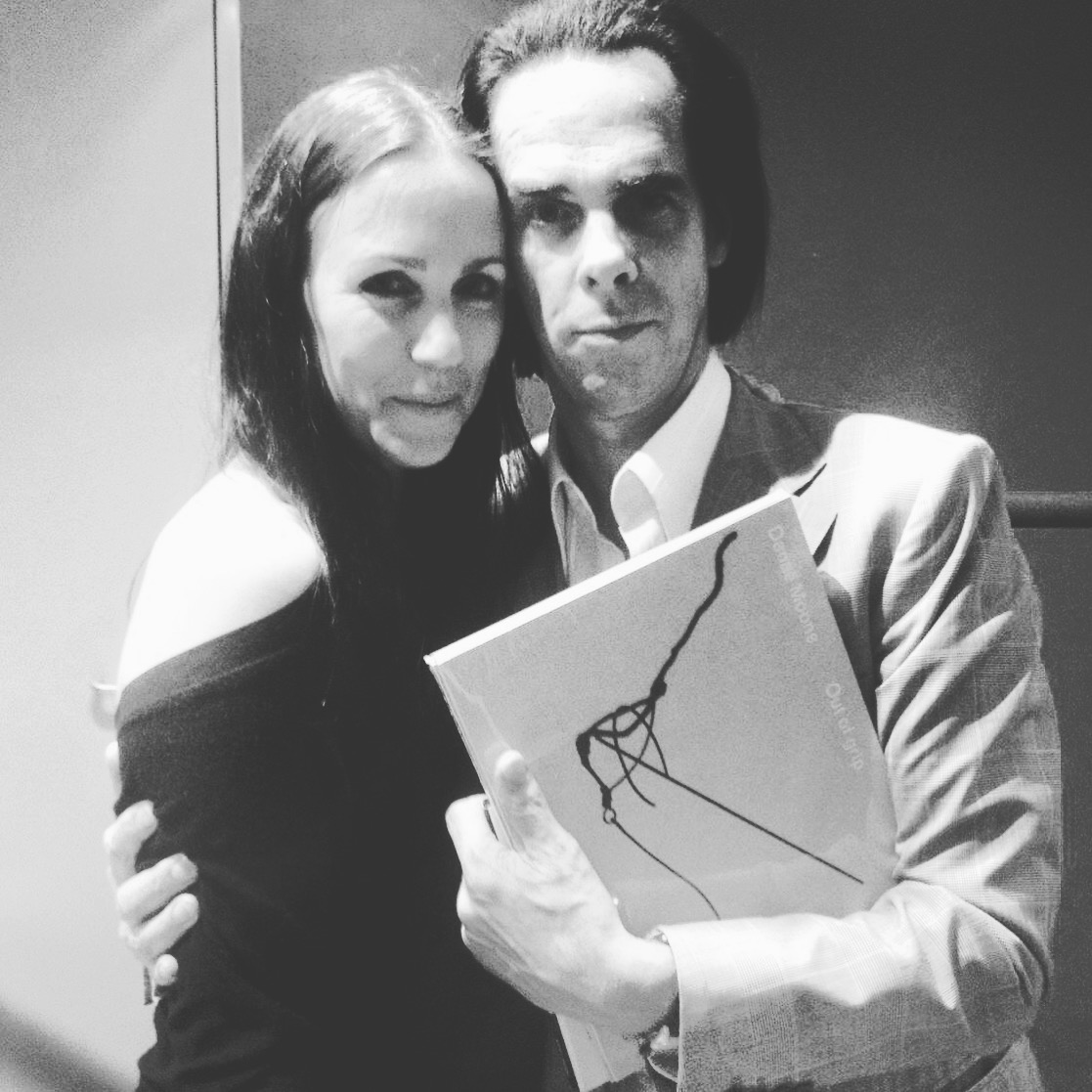 NICK CAVE
nick cave, who's music is one of danaë's main sources of inspiration, is presented a copy of the book out of grip by medea, danaë's sister.
read more about the book 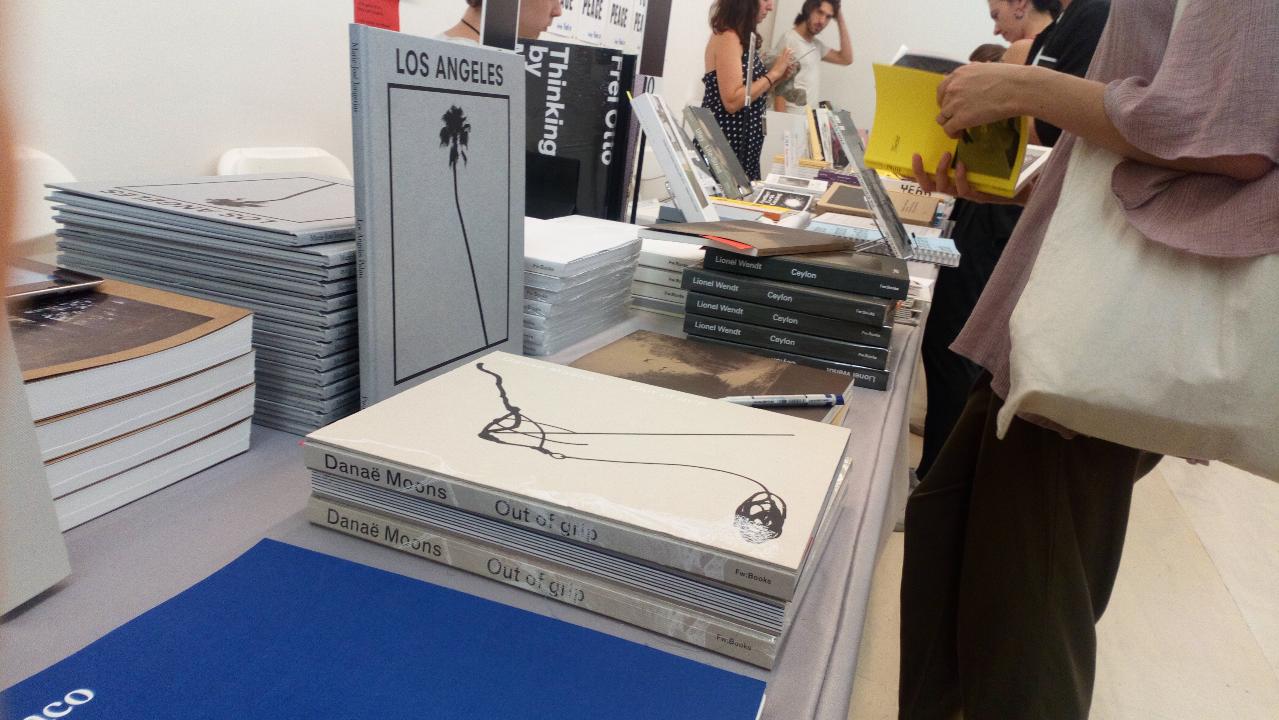 NY ART BOOK FAIR @ MoMA PS1
out of grip is presented at the fw:books stand at the new york art book fair at the MoMA PS1 galleries.
read more about the book 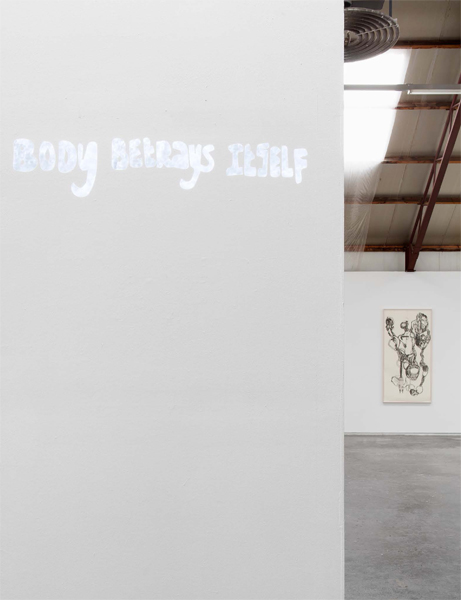 POEMS BY ANNEMIEKE GERRITS
on the evening of the finissage of the exhibition body betrays itself a number of poems about the exhibition and danaë have been presented by annemieke gerrits.
read the poems here 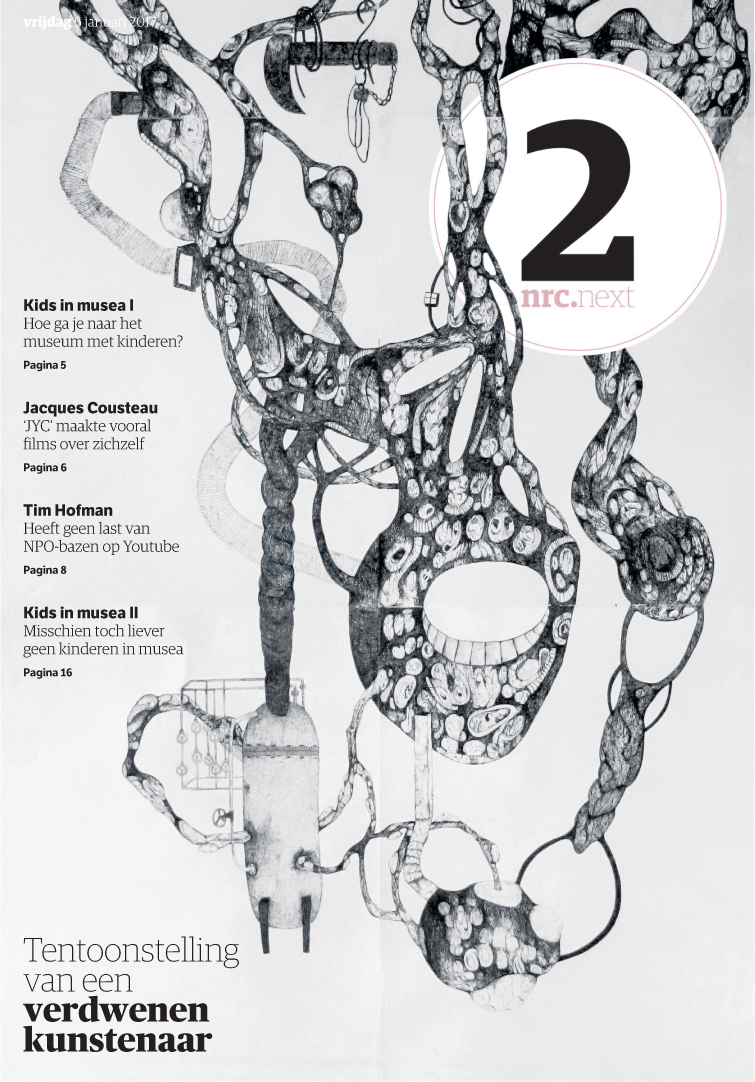 TENTOONSTELLING VAN EEN VERDWENEN KUNSTENAAR
the dutch newspaper nrc.next published a text by hans den hartog jager, extracted from the book out of grip, as a reflection on the exhibition about the works of danaë moons.
read the article in the nrc.next 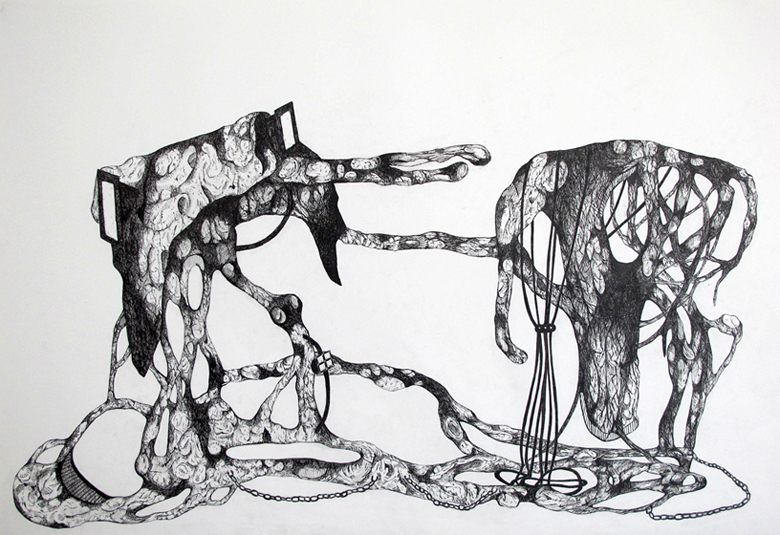 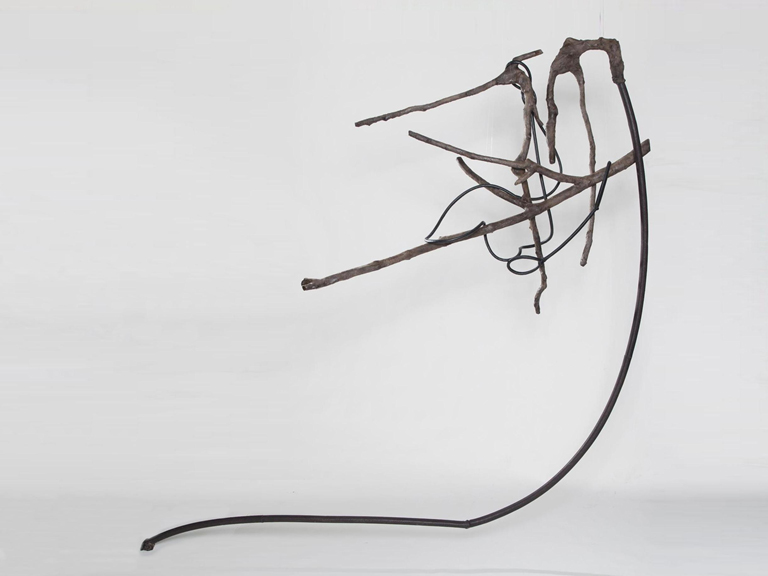 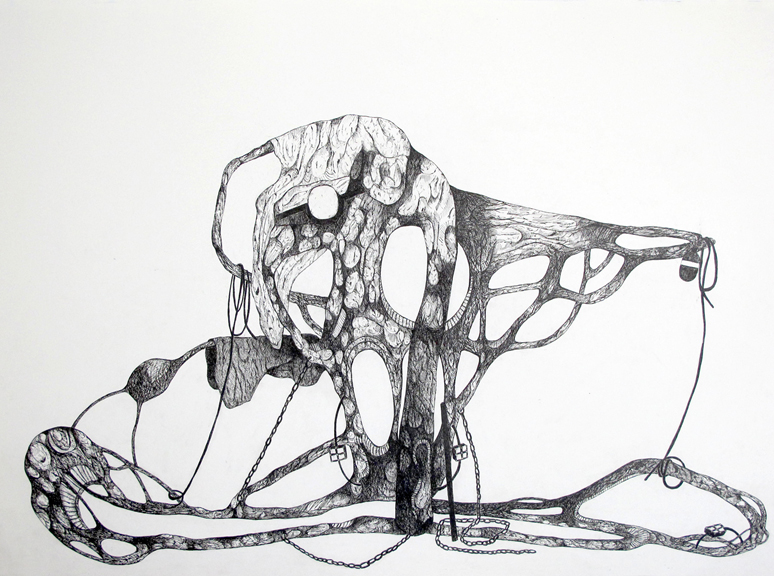 DUISTERE ONGRIJPBARE NATUUR FASCINEERDE DANAË MOONS
another review of the exhibition body betrays itself has been published in the dutch newspaper volkskrant.
read the article in the volkskrant 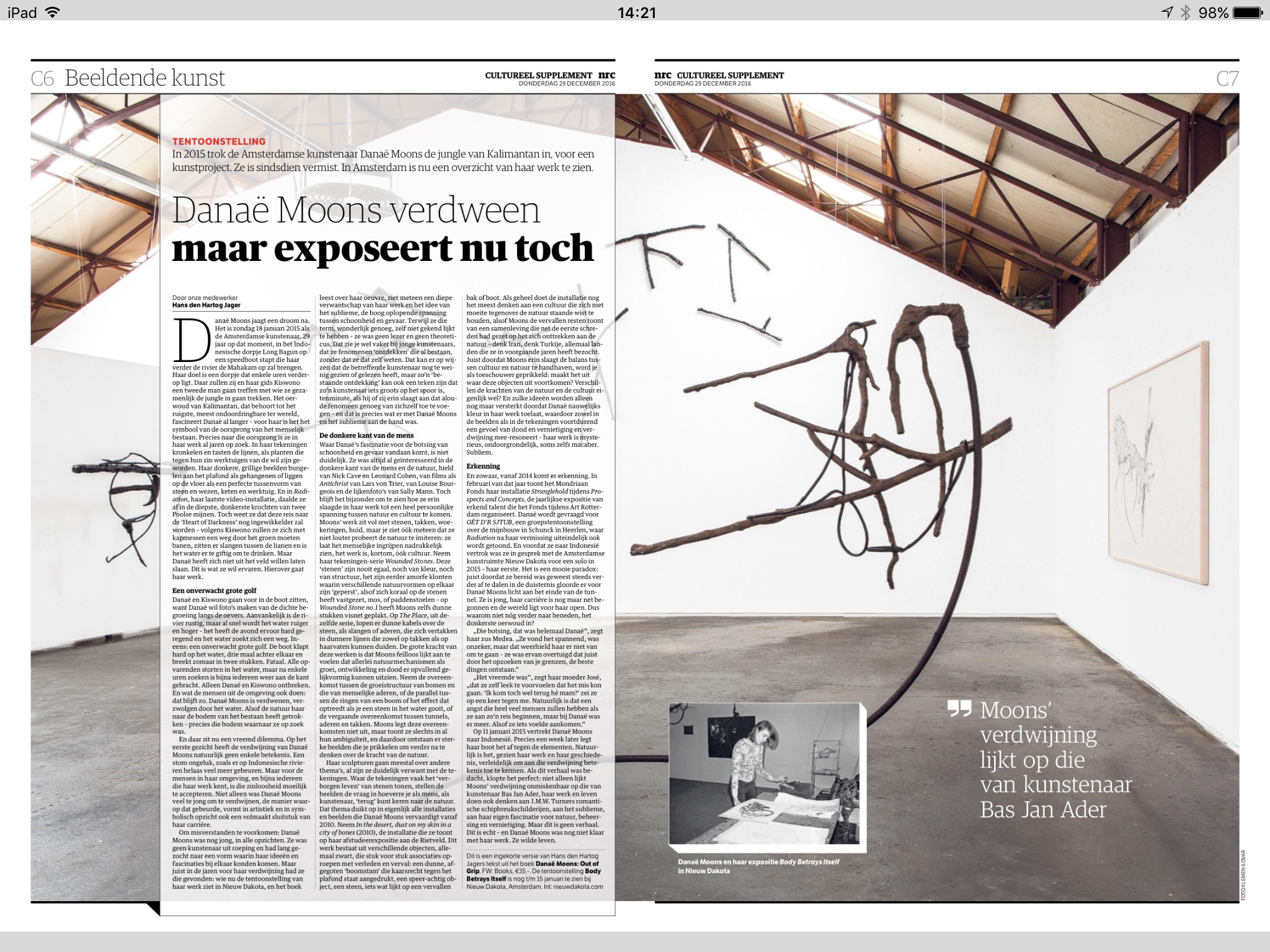 DANAË MOONS VERDWEEN MAAR EXPOSEERT NU TOCH
in the cultural supplement of the dutch newspaper nrc a text by hans den hartog jager, extracted from the book out of grip, has been published as a reflection on the exhibition about the works of danaë moons.
read the article in the NRC 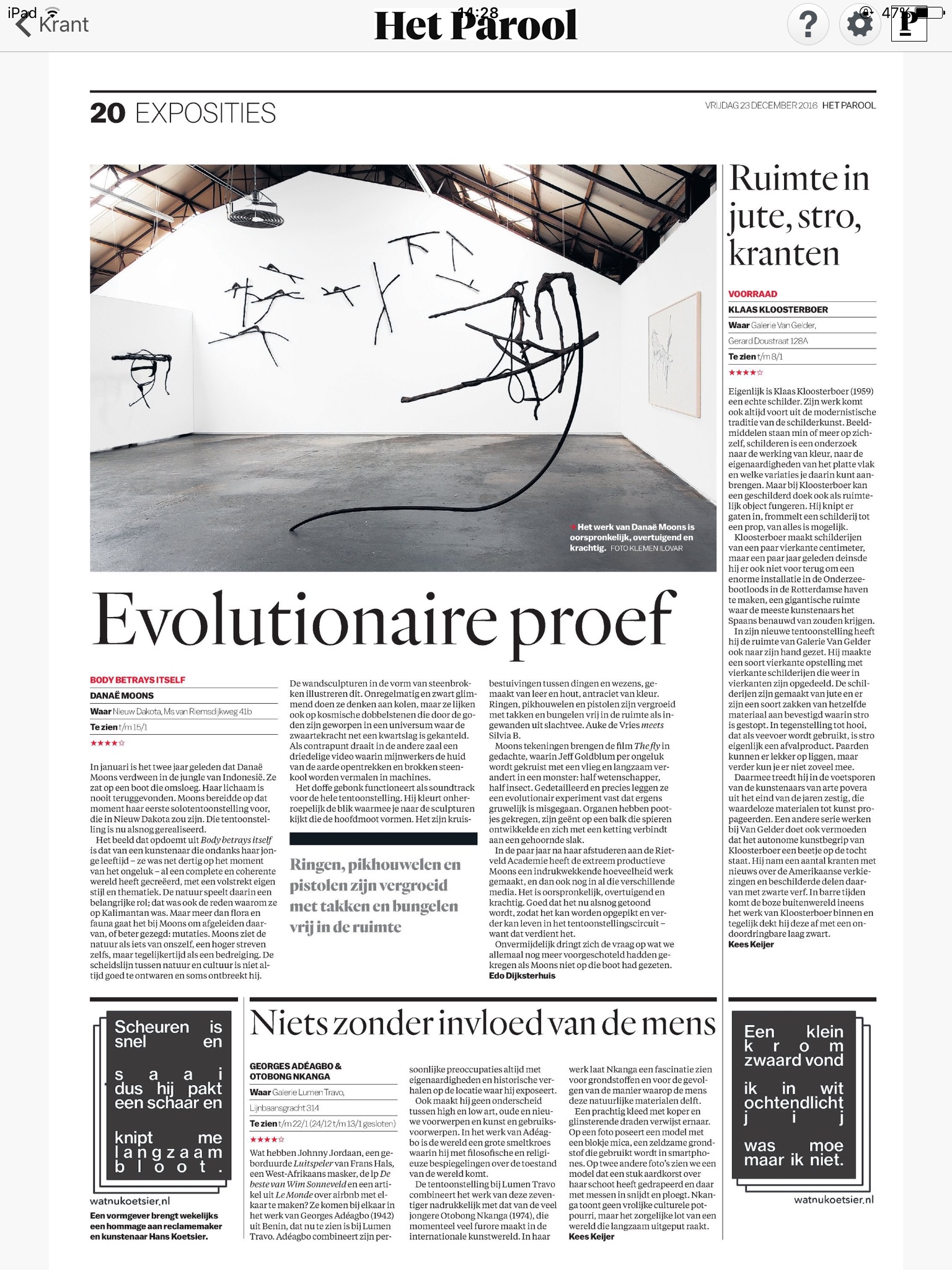 EVOLUTIONAIRE PROEF
a review of the exhibition body betrays itself has been published in the dutch newspaper het parool. the exhibition received 4 of a possible 5 stars.
read the article in het parool 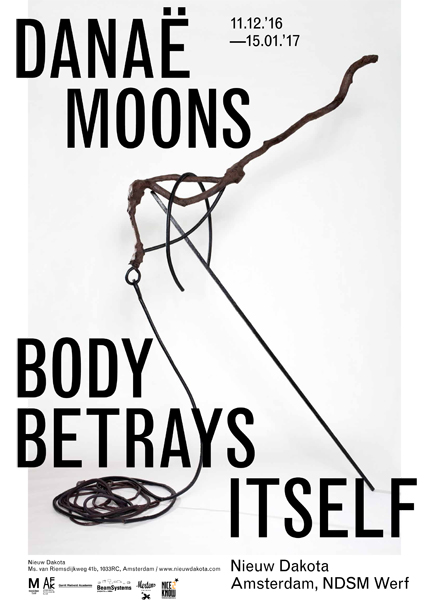 BODY BETRAYS ITSELF
the first solo exhibition of danaë moons' works - body betrays itself - will open on sunday december 11th 2016 at the nieuw dakota in amsterdam. the works of danaë moons will be on show until january 15th 2017.
nieuw dakota, amsterdam 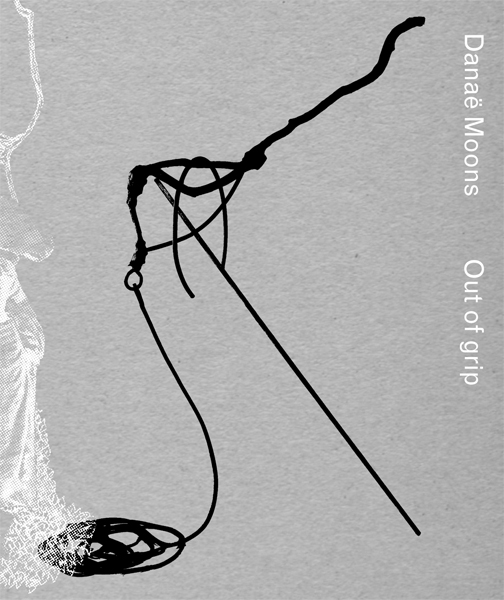 OUT OF GRIP
the book about the works of danaë moons with the title out of grip will be presented at the opening of the exhibition body betray itself on sunday december 11th 2016 in nieuw dakota in amsterdam.
read more about the book 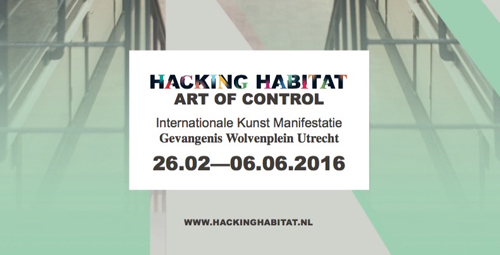 HACKING HABITAT extended
the hacking habitat exhibition the art of control in the former wolvenlein prison in utrecht will be opened on february 26th 2016. danaë moons' work 'stranglehold' is presented in one of the former cells. the exhibition can be visited until june 6th 2016.
hacking habtiat, utrecht